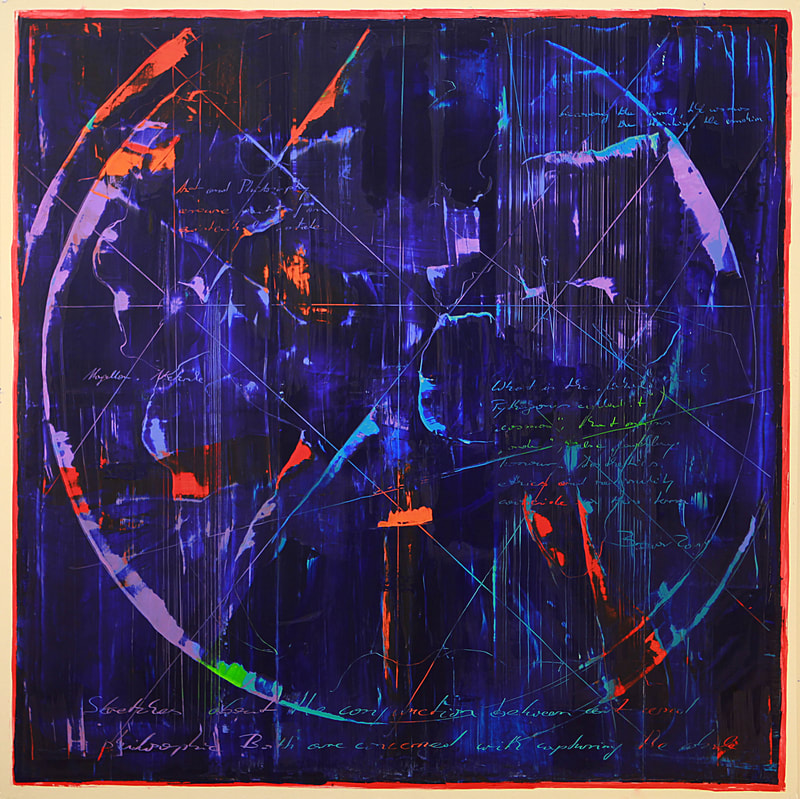 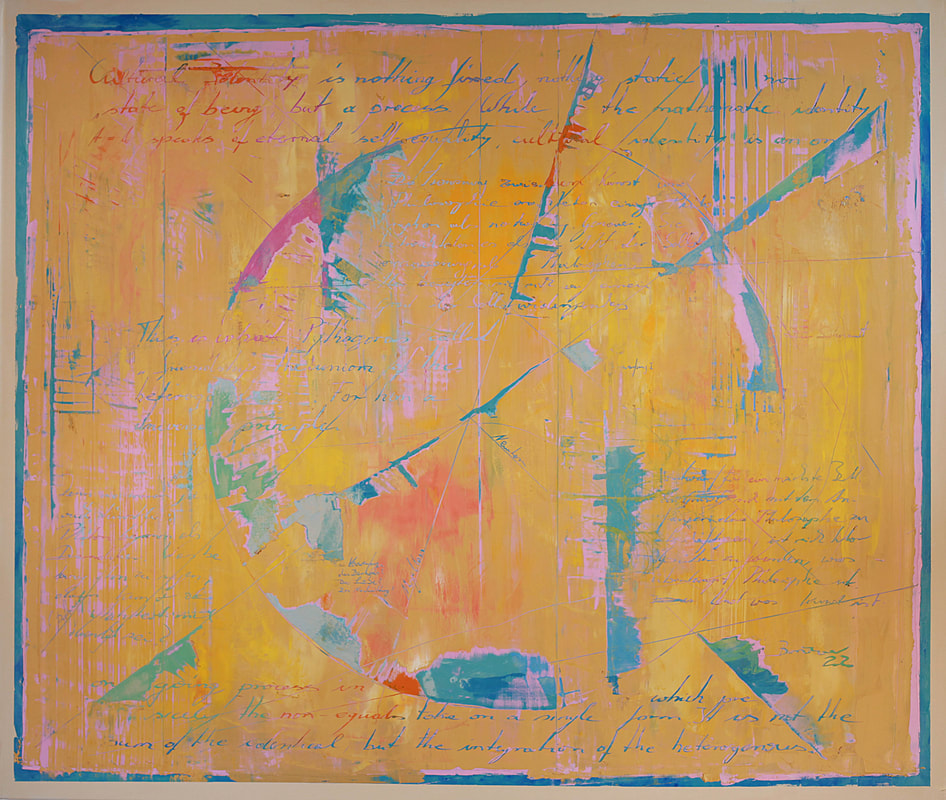 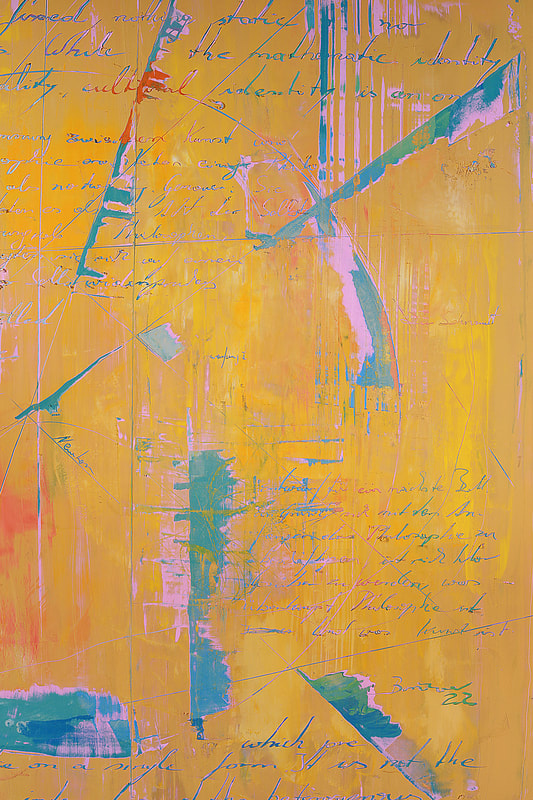 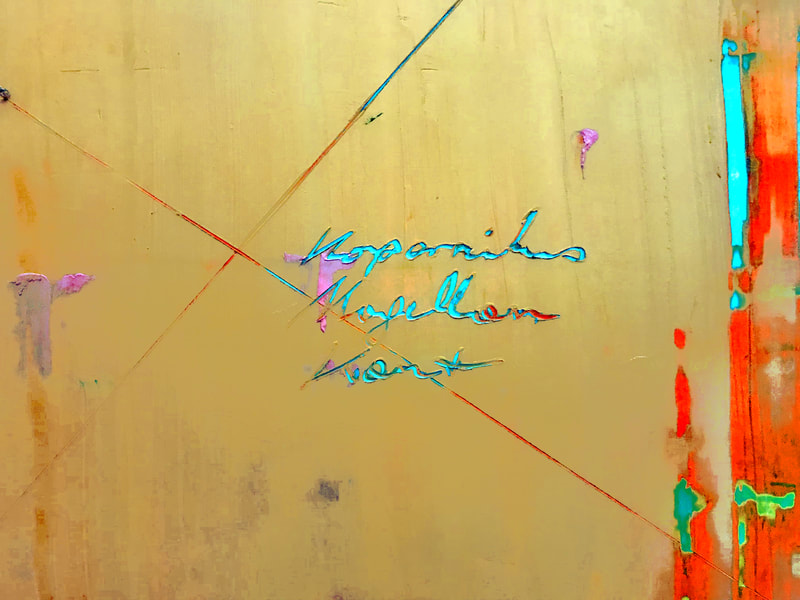 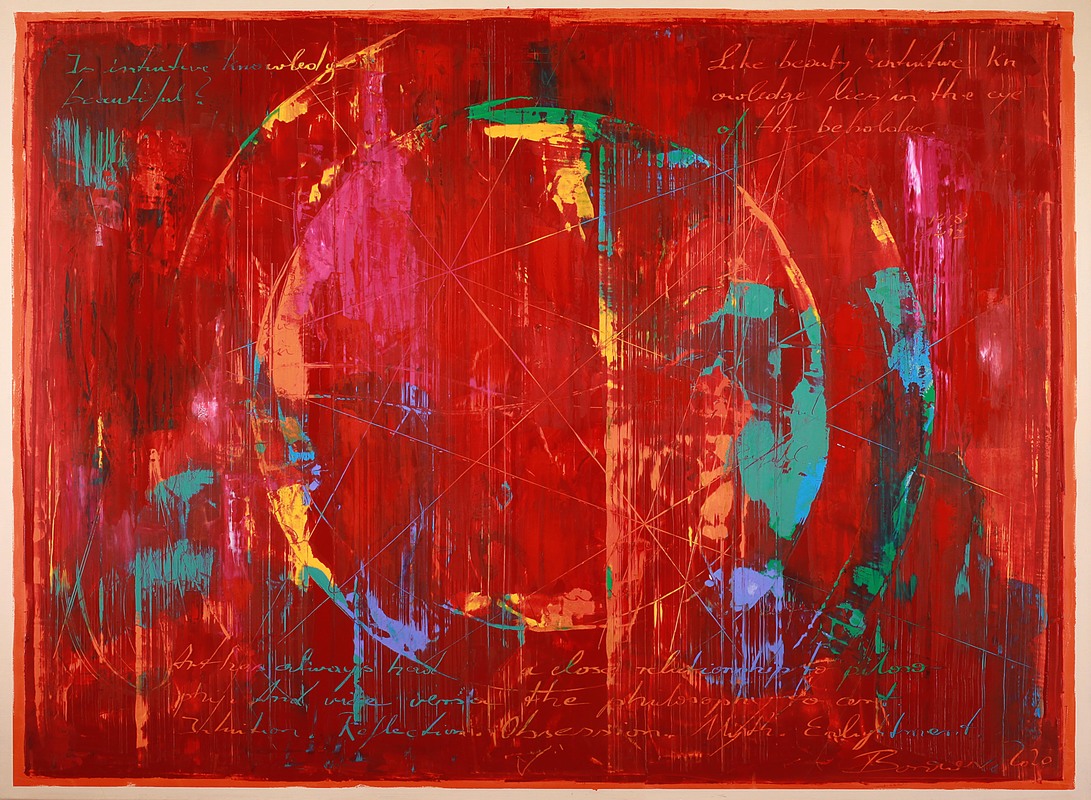 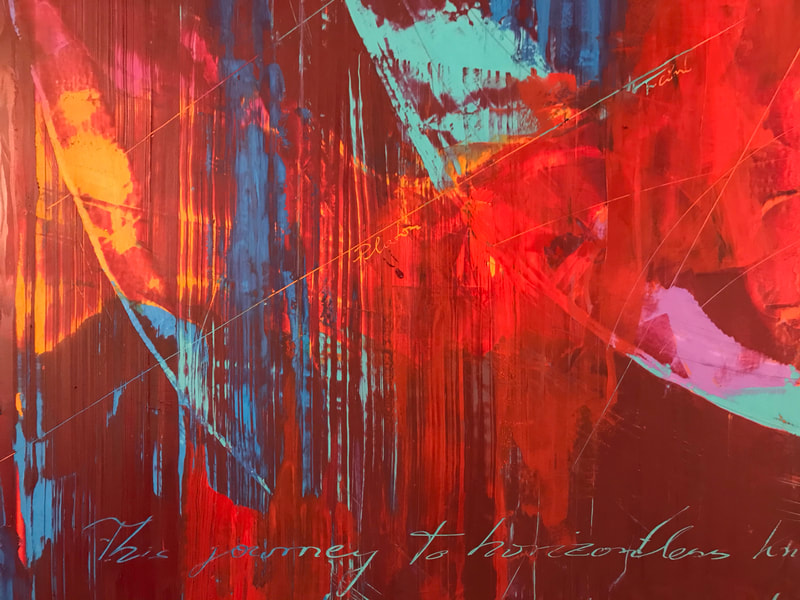 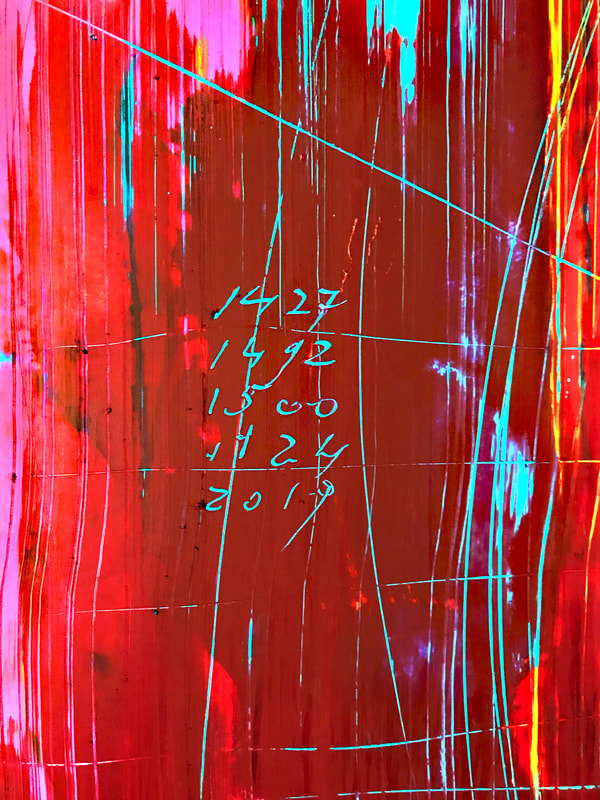 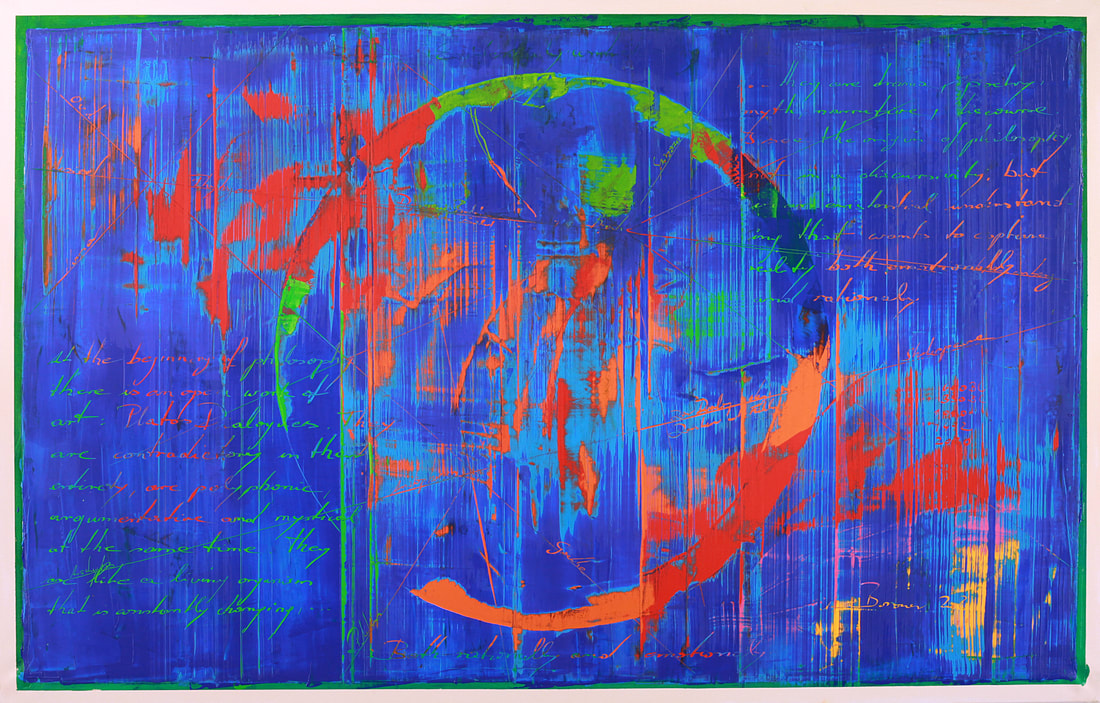 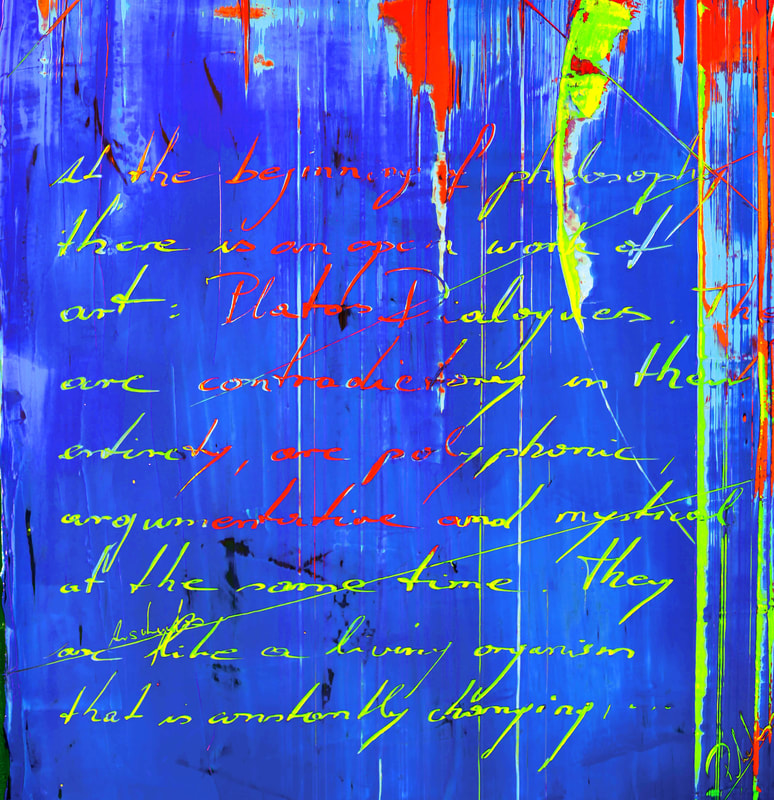 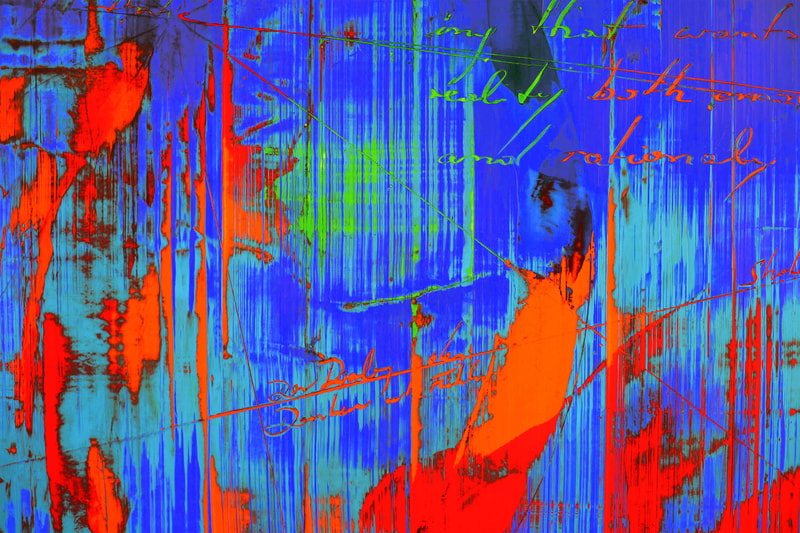 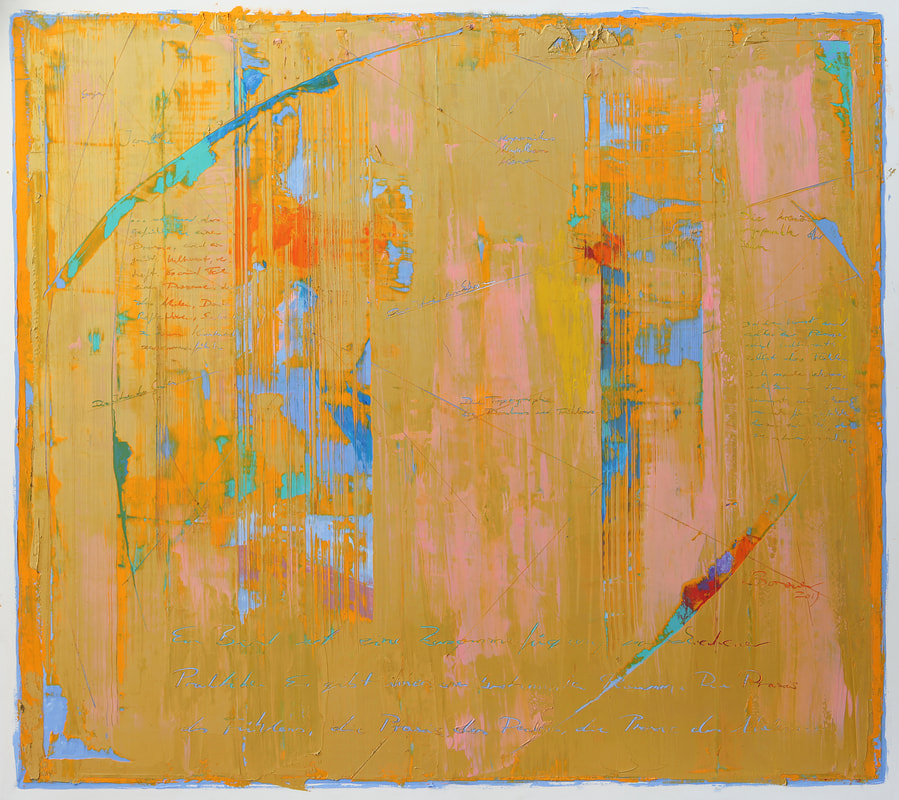 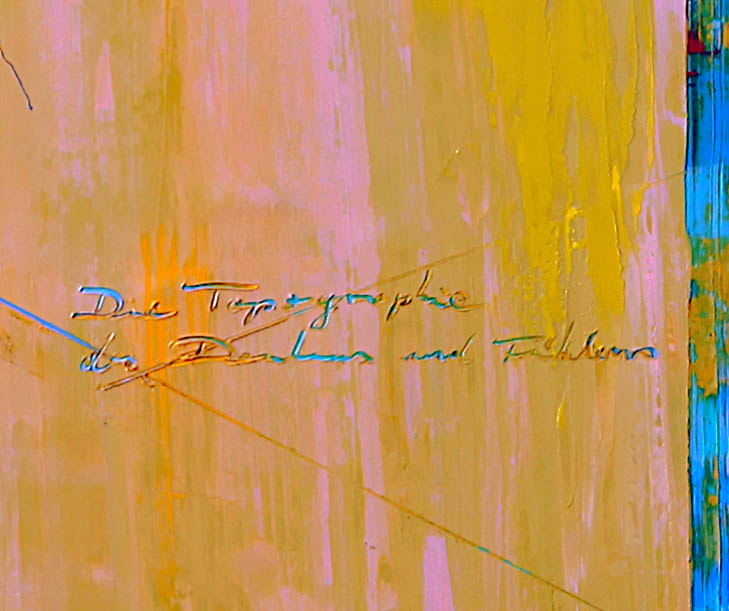 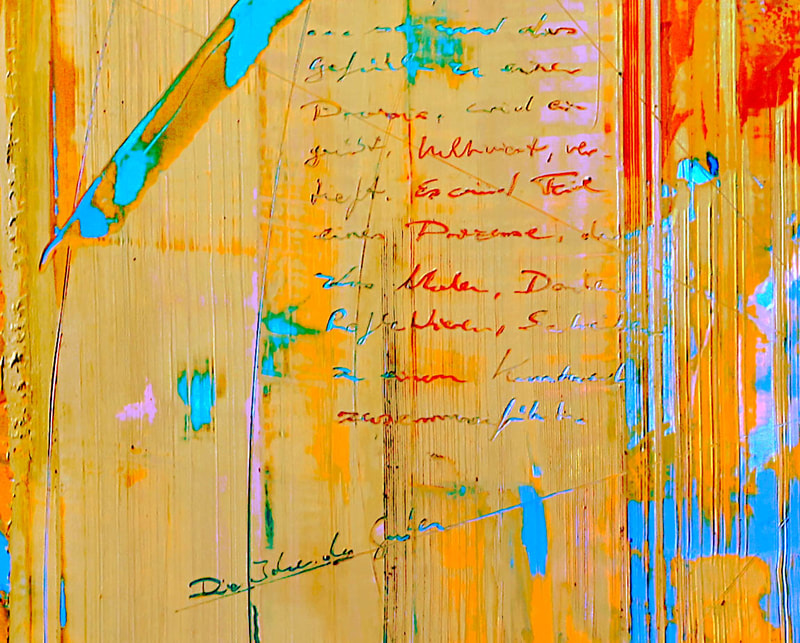 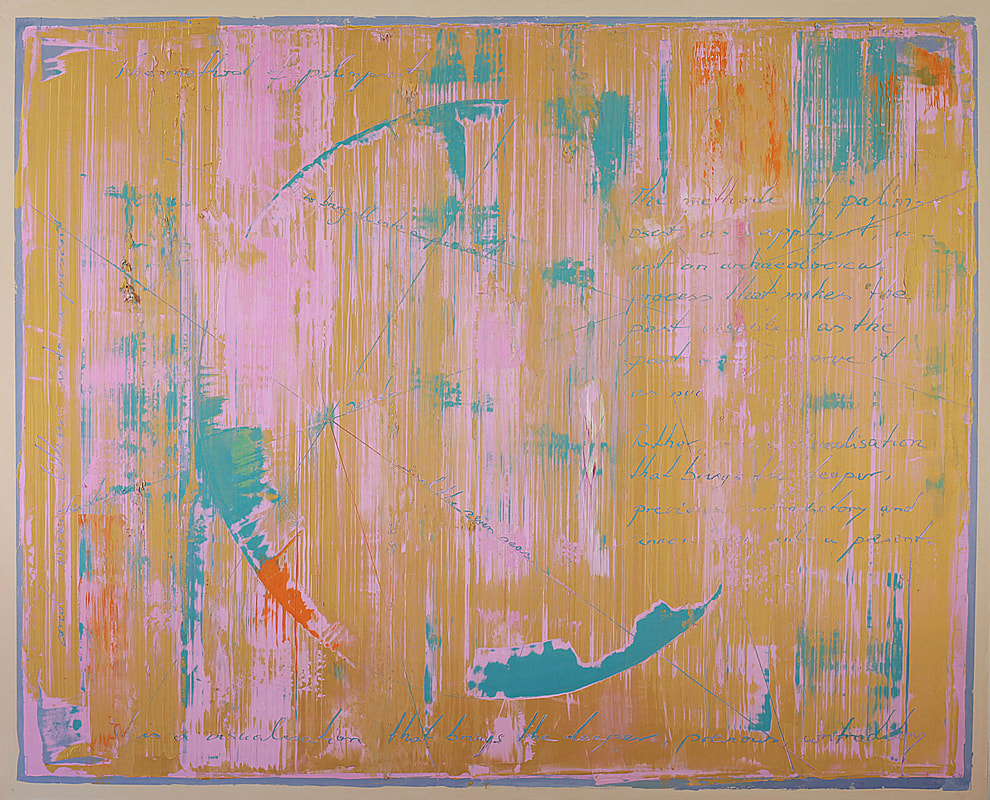 The method of palimpsest. 2019. mixed media on canvas, 105 x 130 cm
Inside text: Originally, a palimpsest is a document that has been scraped off and overwritten. For me, though, it is a presentation that brings the deeper, previous, contradictory into a present. 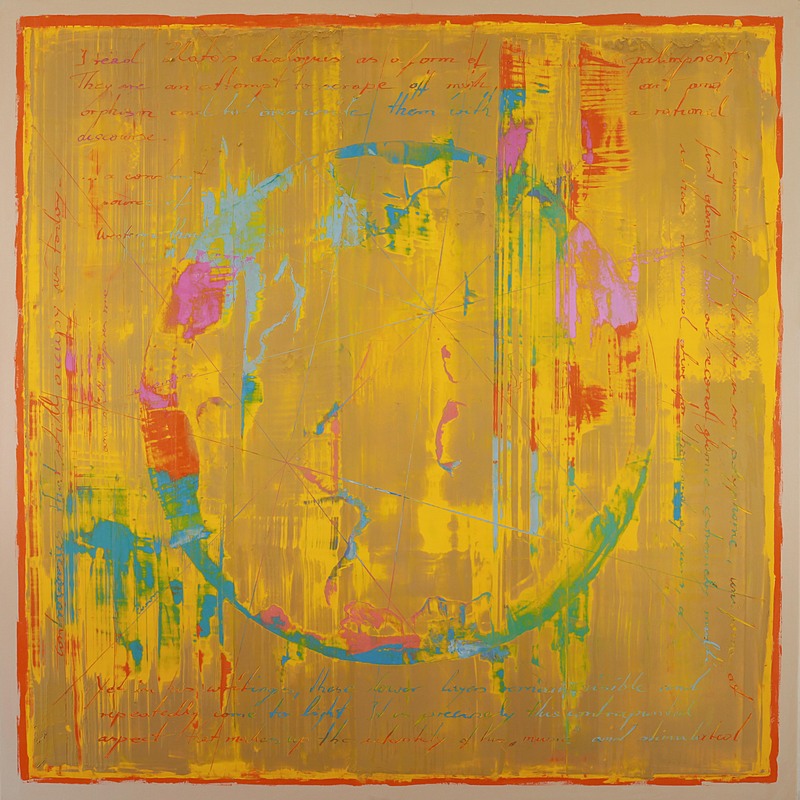 Plato's Identity. 2020. Mixed media on canvas. 130 x 130 cm
I see Plato's dialogues as a form of palimpsest. They are an attempt to scrape off myth and art and to overwrite them with a rational discourse. Yet in his writings, these lower layers remain visible and repeatedly come to light. It is precisely this contrapuntal aspect that makes up the identity of his philosophy. 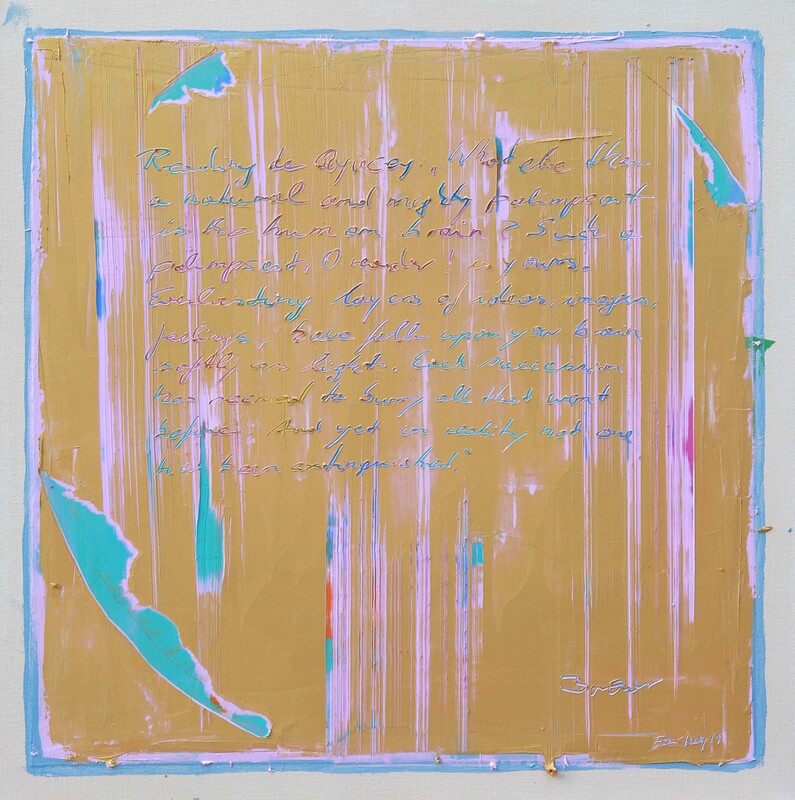 Palimpsest. 2019. mixed media on canvas, 50 x 50 cm
“What else than a natural and mighty palimpsest is the human brain? Such a palimpsest is my brain; such a palimpsest, O reader! is yours. Everlasting layers of ideas, images, feelings, have fallen upon your brain softly as light. Each succession has seemed to bury all that went before. And yet in reality not one has been extinguished.”
text: Thomas, de Quincey, 1850 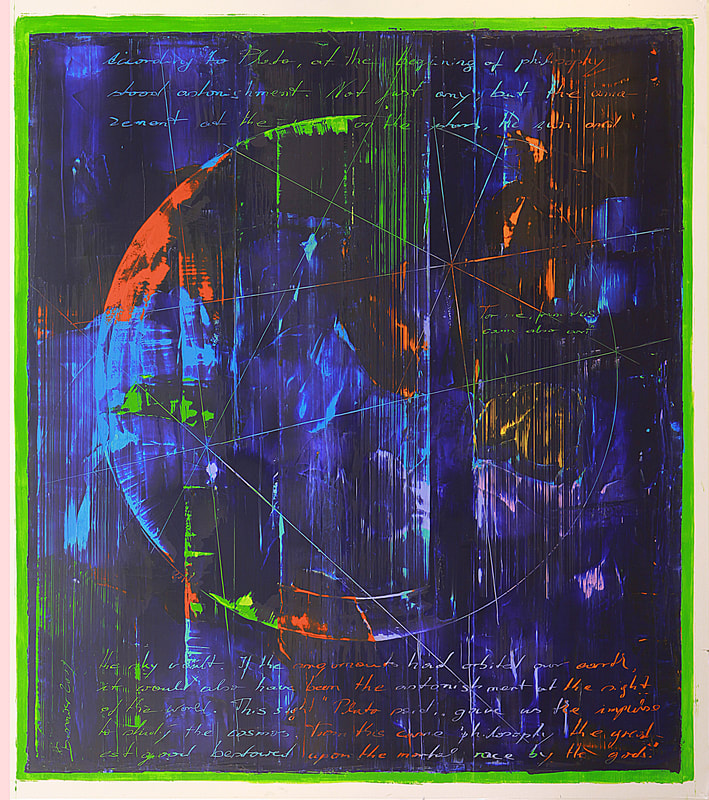 According to Plato. 2019. Mixed media on canvas, 180 x 160 cm
According to Plato, at the beginning of philosophy stood astonishment. Not just any, but the amazement at the view on the stars. "This sight," Plato said, "gave us the impulse to study the cosmos. From this came philosophy, the greatest good bestowed upon the mortal race by the gods”. 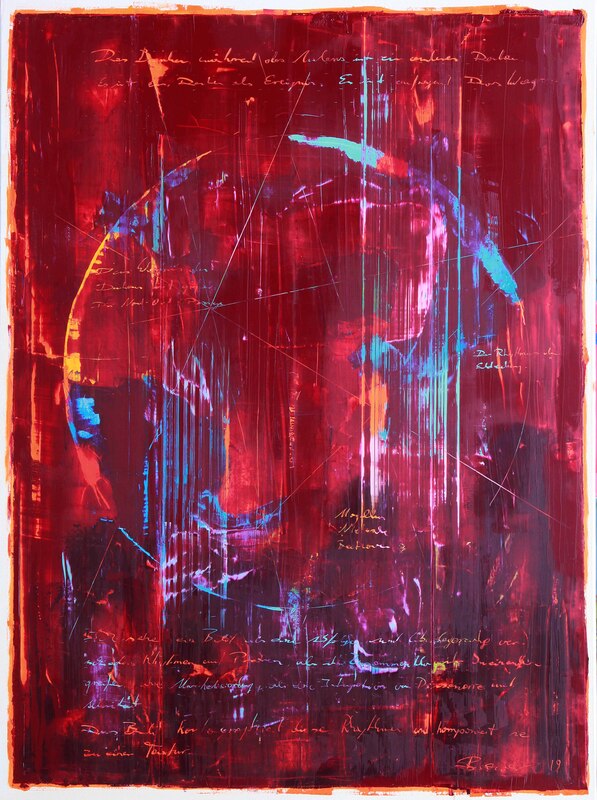 Superimpositions of rhythms. 2019. mixed medio on canvas. 2019. 160 x 120 cm
"I consider an image as a sequence and superimposition of different rhythms and practices, as their interplay, their intertwining, their musicalization, as an integration of dissonance and alterity. The image maps these rhythms and composes them into a texture".
text: D. Borower 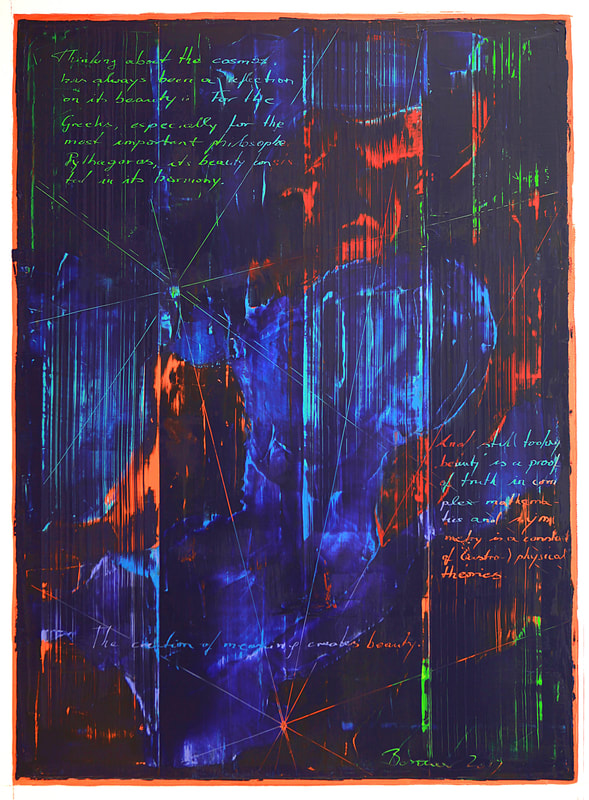 Thinking about the cosmos. 2019. mixed media on canvas, 160 x 120 cm
Thinking about the cosmos has always been a reflection on its beauty. For the Greeks, especially for the most important philosopher Pythagoras, its beauty consisted in its harmony. And still today "beauty" is a proof of truth in complex mathematics and symmetry is a constant of (astro-) physical theories.
text: D. Borower 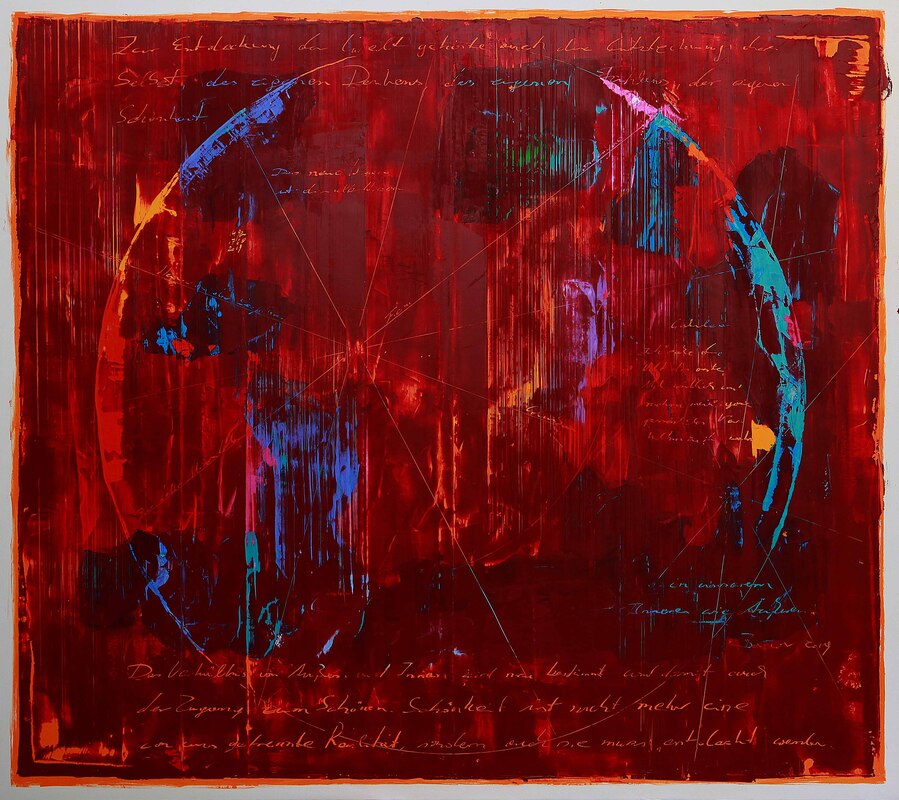 Die Entdeckung der Welt und die Entdeckung des Selbst. 2019. mixed media on canvas, 160 x 180 cm
The relationship between outside and inside is reinvented and thus the access to beauty is also redefined. Beauty is no longer a separate reality from us, but must also be 'discovered'.
text: D. Borower 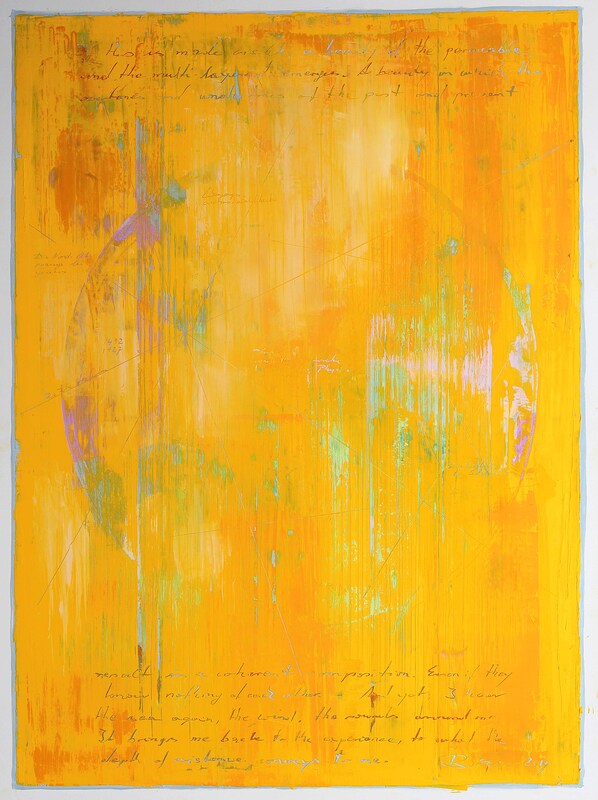 If this is made visible. 2019 mixed media on canvas, 160 x 120 cm
If this is made visible, a beauty of the permeable and the multi-layered emerges. A beauty in which the overtones andundertones of the past and present result in a coherent composition. Even if they know nothing  of each other. text: D. Borower 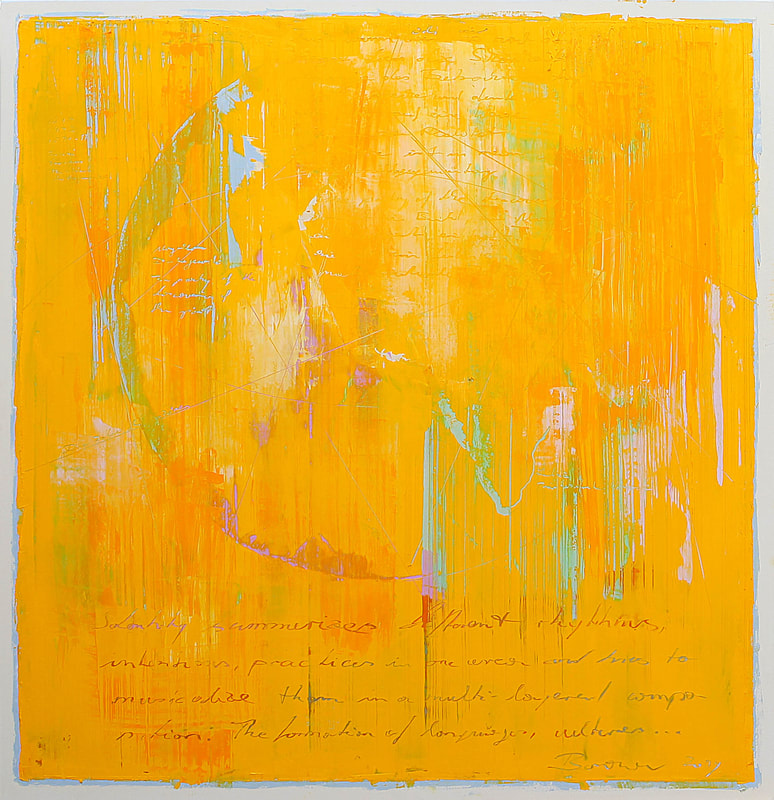 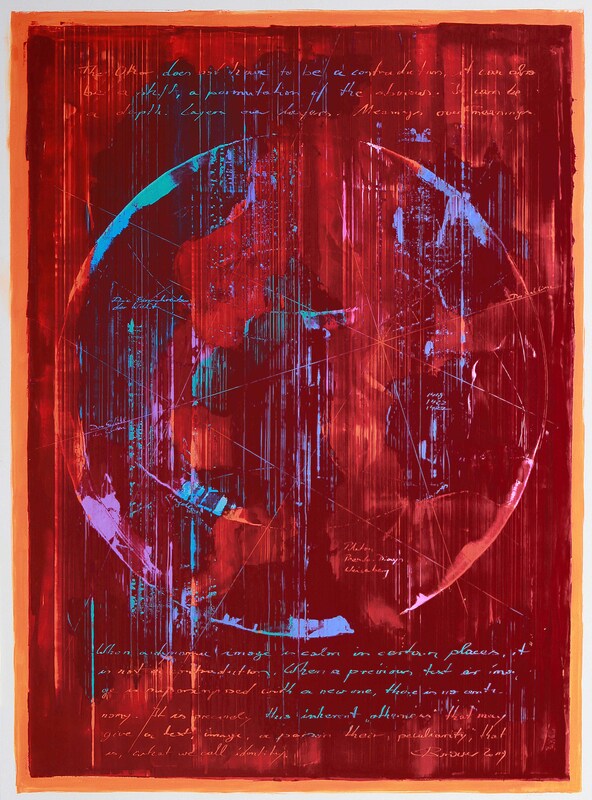 t can also be a shift, a permutation of the obvious. 2019. mixed media on canvas, 120 x 160 cm
When a dynamic image is calm in certain places, it is not a contradiction. When a previous text or image is superimposed with a new one, those is no antinomy. It is precisely this inherent “otherness” that may give an image, a text, a person their pecuiarity, That is, what we call identity.

The Other does not have to be a contradiction, it can also be a shift, a permutation of the obvious. It can be a depth. Layers on layers. Meanings over meaning. text: D. Borower 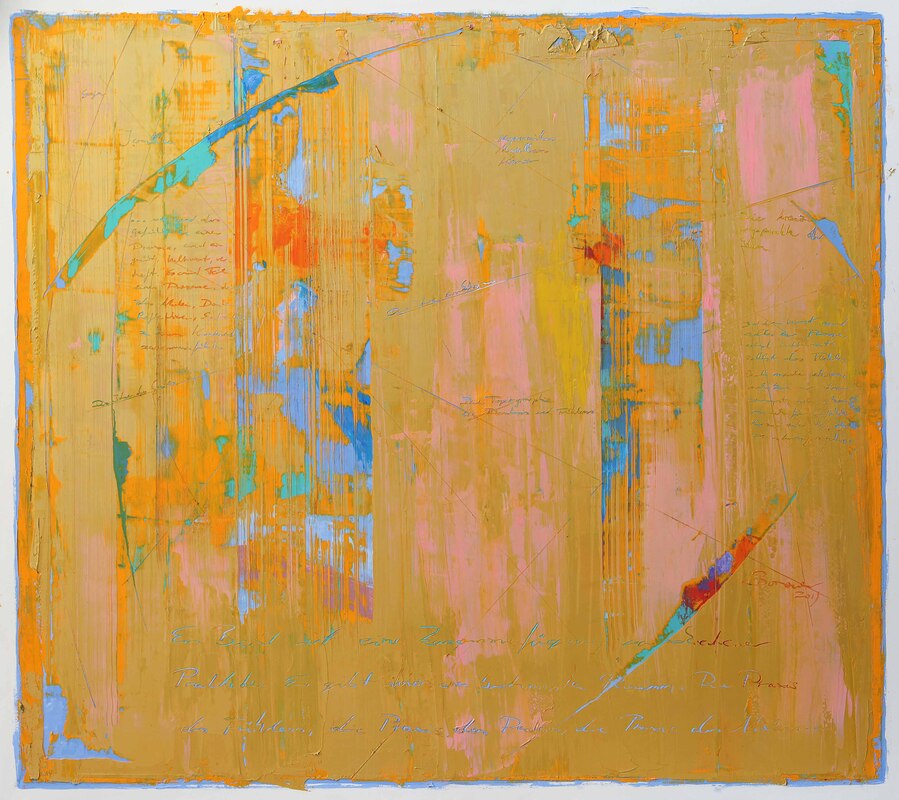 Die Topographie des Denkens und Fühlens, 2019. mixed media on canvas, 160 x 180 cm
In art, everything becomes practice - even the emotions. I I'm doing something, I'm aware of that, I'm looking at which the feelings I develop ... so the emotion is cultivated, rehearsed, deepened. It becomes part of a process that involves painting,thinking, reflecting, writing into a work of art.
text: D. Borower 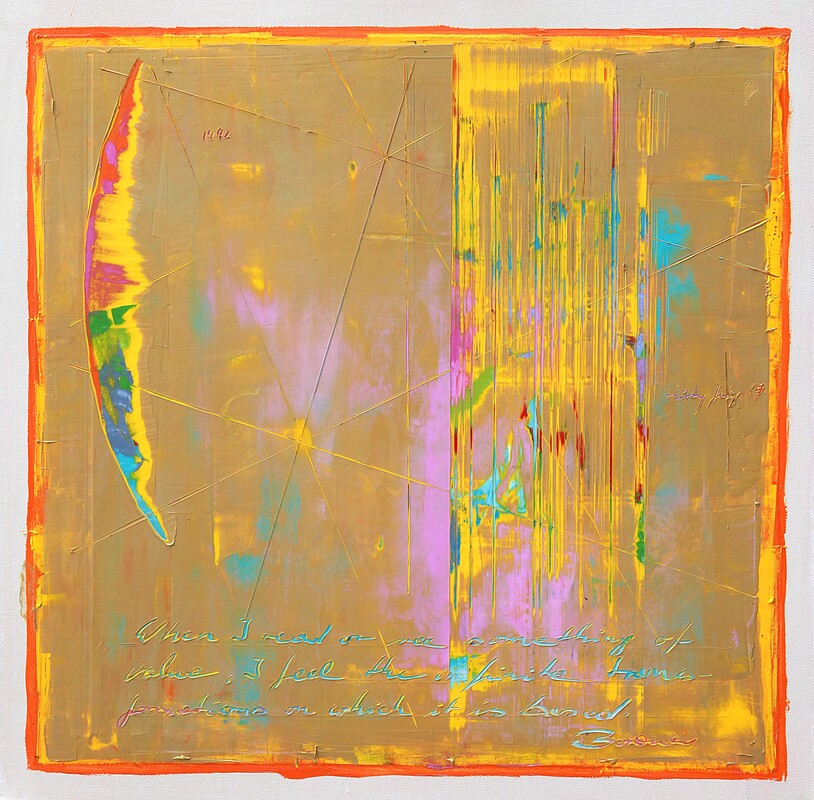 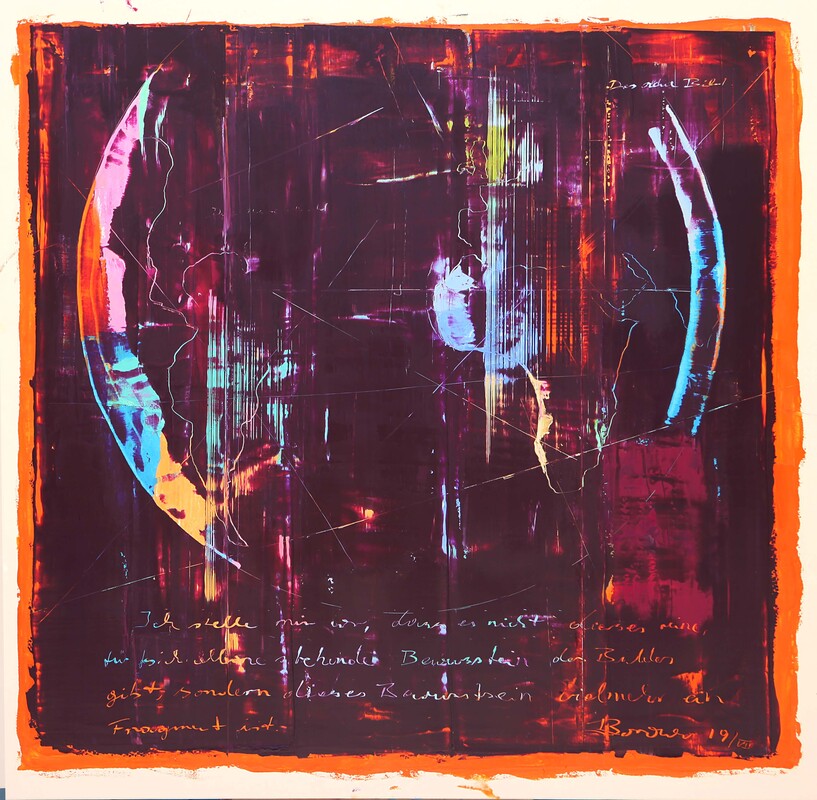 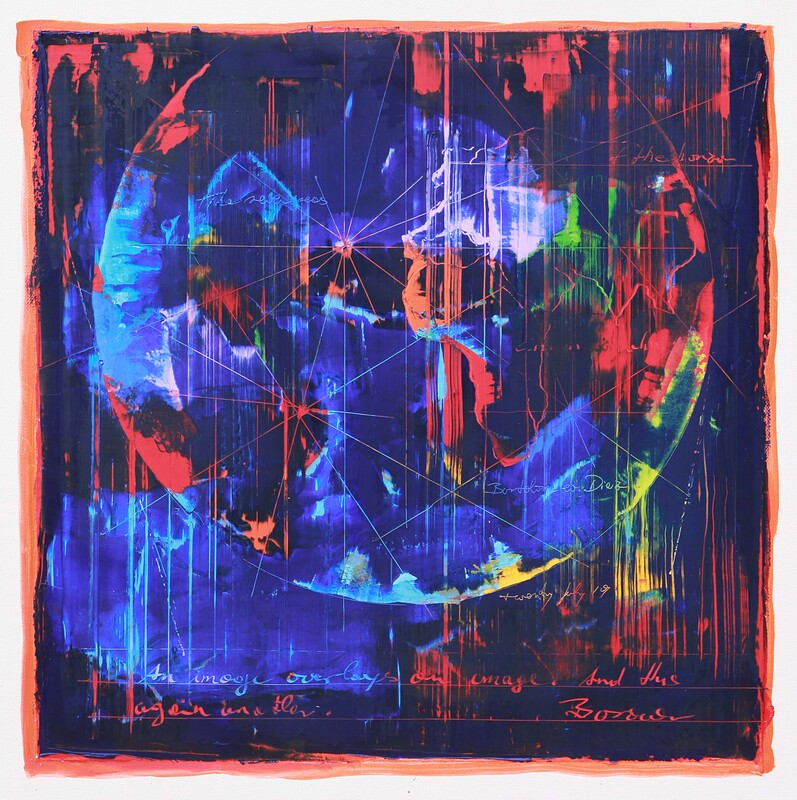